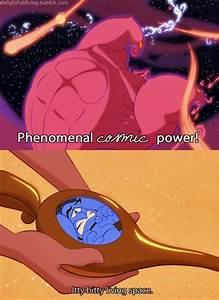 I think you know me when it comes to movies, remakes and prequels. I like the originals. No. I LOVE the originals! I don’t like what “they” did with Star Wars (whoever “they” is) with all the renumbering of the movies, etc. Star Wars came out in 1977; The Empire Strikes Back came out in 1980; The Return of the Jedi came out in 1983. These are facts grounded in history’s timeline. For me, these will always be episodes one, two and three. I wish people would stop messing with me half-way through my life.

Dittos goes with Disney’s Aladdin. I love the 1992 animated version with Robin Williams as the Genie. One of the lines in the film was when Genie was telling about how powerful he was, yet he was still enslaved to the master and owner of the lamp; “Phenomenal cosmic power; in an itty-bitty living space.”

That sums up what’s going on in this passage from Zechariah 9:9 quoted in Matthew 21:5. Jesus has just entered His last week of His ministry and mission here on earth. It’s Palm Sunday and by the end of the week He’ll be hanging on a cross. He has work to do that only He can do. He needs to release all of God’s phenomenal cosmic power–breaking Satan’s, Death’s & Sin’s grip on humanity–in an itty-bitty living space, namely, through Jesus Christ alone.

The phrase daughter of Zion means ‘one who needs protection’. I know this isn’t politically correct today, but God wasn’t dealing with political correctness in the days of Zechariah and Jesus. Daughters needed protection and security from their fathers. This points to those who need protection and security–the marginalized of society; sinners looking for hope, confidence and security–to what God the Father will do, and still does today. This passage in the Bible points all people to Jesus. God confined all His phenomenal power in the itty-bitty living space called Jesus. He was born the Christ-child in Bethlehem’s manger. From there, the Christ-child grew up living the perfect life for you and all humanity. And at the end of His rescue mission, there was a cross with your name on it. But Jesus climbed aboard that cross for you.

Jesus then paid the penalty and the penalty phase for your sins and mine too. Upon His last breath, the Christ-child broke the powers and curse of sin that held you. Upon His resurrection on Easter, the Christ-child broke the powers of physical and eternal death in hell that bound you too. Jesus released all God’s phenomenal cosmic power on Easter. Now, He’s no longer bound to the itty-bitty living space here on earth. He’s taken His rightful place once again on God’s throne. And the Babe born in Bethlehem is returning on an unannounced day.

This Jesus is your Jesus! God’s phenomenal, cosmic power over sin, Death (eternal death in hell) and death (physical death) was delivered to each of you in your baptisms. And this Jesus, who entered Jerusalem in humility, is returning again for you. But this time He will come, not humbly in a manger, but rather in His full majesty, glory and power. Are you ready for Him? You are, through trusting in Jesus the Christ-child alone as the Savior of your life. There are no strings attached. It’s a free gift to you–not only at Christmas, but everyday of your life.