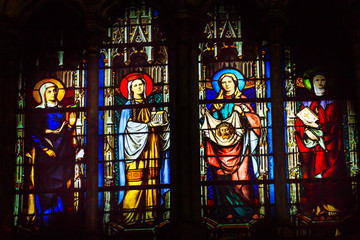 Do you remember what November 1st is? Yup. All Saints’ Day. So here’s the question: What in the world is a saint anyway? What’s your answer? Well—-? And can you name any saints–other than the New Orleans Saints? If so, how many can you name?

Most people will say that a saint is a person who lived a holy life. Maybe it’s a person who did a lot of good things in this world and for other people before they died. The requirement for sainthood in the Roman Catholic Church is that the person had to live a good life worthy of imitation, or someone who converted and left immorality behind. This same person has to have at least two “postmortem” miracles attributed to them. Do you know what postmortem means? It means “after death.” Yup. Two miracles have to be attributed to the person after he or she has died. And the other requirement is—-the person has gotta be dead.

But, as good Lutheran Christians, we go to the Bible to find our answers. And what can we learn from the Bible about saints? Well, take a look at 1 Corinthians 1:2 as an example. What does it say there? Paul calls them saints. This is from the Greek word hagios, which means ‘holy one’.

But, what do you know about the congregation in Corinth. If Paul wrote this letter to them and began by calling them saints, then that means they must have been pretty good people with not a lot of issues going on. Right? Wrong! When you read this letter, the Corinthian Christians were living in ways that was anything but holy and moral. They were suing one another–Christians suing other Christians, the rich Christians were looking down their noses at the poorer Christians, some were coming to church drunk, and a stepson, who was a Christian, was sleeping with his stepmother and no one in the congregation seemed to have a problem with that. This was because they formerly were pagans and some of these practices were perfectly acceptable according to their former way of living. They were anything but ‘saints’, as many people would define that word.

However, Paul reminded them of who they were in Christ Jesus. That’s what Paul ALWAYS does in his letters. He never leaves his hearers and readers in doubt. And the Corinthians were holy saints because of their faith in Jesus Christ alone, and not by the way they were living. They received Jesus’ holiness when they were baptized. So, God saw Jesus in them and counted them as holy. He did NOT approve of their way of living, however. That’s why Paul called them to repentance-or to change their ways.

Have you ever considered yourself a saint? If not, how come? Is it because of things you’ve done in the past, or language you use, or how you might treat other people? What about your thoughts, words, and actions; are they fitting of a saint? If you don’t consider yourself a saint, then I want you to begin RIGHT NOW! When you look in the mirror as you brush your teeth, shave, do your hair or whatever you’re doing in front of the mirror, I want you to see Saint fill in your name. You are holy because of your baptism. You are holy because of your faith in Jesus. You are holy because the Holy Spirit dwells in you. That’s GOD’s HOLY SPIRIT! You can’t have anything holier that God living in you!! He turns sinners into saints–hagios holy people. Now we are to reflect God’s holiness to others in this world–but God knows that we will not do this perfectly.

So, what do you think about that? How does this change your perception of yourself? How should this change the way you treat others; the language you use; how you see other people? Sanctification means ‘holy living’. That does mean that we are going to do this perfectly. But it also doesn’t mean that we shouldn’t change try to change our ways either. Sanctification means that we are to repent–or turn away from–our old ways and bad habits. And this takes time and work.

What changes will you begin to make? What will try to work on? Remember, YOU ARE A SAINT! And that’s a great gift and good news from God.

I love you my holy ones! Dad